Why Eco Tourism in Costa Rica is Important for Families

The world definitely has some things that it needs to work out. The polar caps have seen a monumental reduction in this and the last century. Species are disappearing from the planet at an alarming rate. Trash is conglomerating in the oceans, and causing major problems for schooling fish and other sea life.

A growing awareness as to the problems that are faced in the world is clear, but the question is how people can make a difference in this regard. This presents an opportunity for many to make adjustments and improvements, and one of the best ways to do so is by seeing some of the best practices in that regard.

For many years, a small Central American country has been making exceptional environmental, social and economic changes on an incremental level that have gone mostly unnoticed throughout the world. Costa Rica is that country, and things such as abolishing the army to generating the majority of its power through hydroelectric dams are some of the ways that it has made its contribution to society at large.

Raising awareness can be a focal point for so many families as they trek through the various countries of the world. The classroom no longer need be confined to schools, libraries and institutions. There is an outstanding learning environment beckoning the young and old to learn from its surroundings all the time.

Service learning has long been a staple of organizations such as the Peace Corps. We can use their model to analyze the way eco-tourism actually contributes to a healthier environment for all participating parties. When Peace Corps workers head to foreign lands, the impetus is often education, improving conditions and more. The take away is often a greater understanding of the world in general, and a greater appreciation for where a person comes from.

Eco tourism in a place such as Costa Rica represents similar qualities. Learning about a foreign culture, increasing knowledge of the numerous types of species, seeing the way that conservation develops a stronger understanding of the impact people have on the environment and many other factors find their way into the mix when visiting biologically rich locations.

Costa Rica has already done so much to point towards a healthier future. As of March 2015, it became the first country to go 75 days without burning fossil fuels. More than 25% of the land is preserved in a system of national parks, wildlife refuges and wilderness reservations. The proof is in the pudding for all intents and purposes, but a family can assuredly better understand this by seeing it on a firsthand basis.

That is how each person can work towards developing better and healthier practices. Costa Rica has time and again placed as number 1 on the Happy Planet Index for good reason. The country is a pristine example of how proper political reforms can positively affect the citizens and the ecosystem, and taking even a smidgen of that information back to your home country after visiting is how families will do their part in making a brighter future.

Try one of the four tours such as the Essential Costa Rica Tour if you are interested in learning more in Costa Rica! 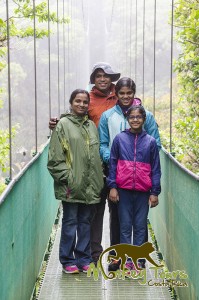