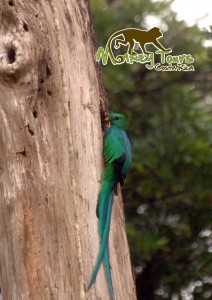 A Resplendent Quetzal entering its nest

The highest elevation of Los Quetzales National Park is 9,843 feet above sea level. At these high altitudes the mountains crack the sky, and the clouds interlope with the land. If you have any inclination towards living like an Olympian minus the exuberant palaces, give Los Quetzales a try. If you don’t, give Los Quetzales a look anyway. It will be more than worth it with Rio Savegre and the treacherous albeit impressive Cerro de la Muerte and its glacial lakes that feed Savegre.

In the park, you’ll find a plethora plants and animals for observation and maybe some minor interaction (i.e. picture taking). Of the avifauna in the park there is of course the majestic Quetzal along with trogons, hummingbirds, the mountain hen, the common blackbird, woodpeckers, the yellow-bellied siskin, goldfinches, the yellowish flycatcher, the torrent tryanulet, the black-headed grosbeak, the flame-throated warbler, bellbirds, the Baltimore oriole, the brown-and-yellow marshbird, the fiery-throated hummingbird, the magnificent hummingbird, the clay-colored thrush, the bee hummingbird and the green heron. Some of the other animals in Los Quetzales consist of the puma, the jaguar, the ocelot, the margay, the jaguarondi, tapirs, coyotes, deer, anteaters, otters, coatis and ring-tailed cats.

Some of the flora to be found in Los Quetzales includes 14 kinds of laurel trees, with species like the aguacatillo, 164 types of mosses and hepatics, 74 species of epiphyte plants and 148 kinds of ferns making the park a prime location to observe the primary forest in its purest state. Los Quetzales was very recently declared a national park in 2005, and has no facilities for visitors. Be sure to keep that in mind before venturing into the park

Los Quetzales National Park is near the cities (in most cases small towns actually) of San Gerardo de Dota, Naranjito and a little further out is the ocean side city of Quepos, Costa Rica. It can be reached via the Quepos airport with Nature Air and Sansa Air. From Quepos you can drive in on routes #34, #243 and #2. Los Quetzales would be best to visit in the dry season form December to the end of April, and you may want to bring a camera, hiking boots and gear, sunscreen, bug repellant, a water bottle, snacks, a pocket knife, a map, a compass and binoculars.