Migrating Humpback Whales are the BIG deal at Marino Ballena National Park in Costa Rica, but they aren’t the only attraction found in the Puntarenas Park. 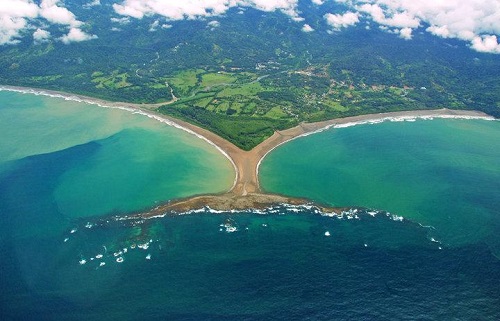 December to April is the period when Humpback Whales return to the waters of Marino Ballena National Park each year. The whales make their way south from the icy cold waters near the Arctic Circle to Marino Ballena in pods. The park conserves the aquatic habitat for these giant creatures, and for the numerous other animals and plants that live in Marino Ballena. The largest Pacific side coral reef is found here, and the snorkeling and scuba diving are world class.

Some of the aquatic fauna that you can expect to run across while on a snorkeling or scuba tour would consist of crabs, worms, about 70 types of reefs and deep-water fish, sea sponges, shellfish, manta rays, hammerhead sharks, starfish and gardens of sea fans among many others in this incredible array of oceanic life. Sea turtles also nest off the shores of Marino Ballena National Park, and the sea turtle species that flock here include leatherback and green turtles. In the sky and picking at fish or other food sources in the water are also a number of birds such as the neotropic cormorant, the little blue heron, the fisher hawk, the spotted sandpiper, the whimbler, the frigatebird, the American white ibis and brown pelicans.

Along with a number of seaweed species found in the ocean, there are plenty of plant species on the shore line and reaching back into the mangroves of Marino Ballena. Some of the species of vegetation found around the beaches include palm trees, blackberry bushes and cork trees. In the swamps and mangroves can be found the red mangrove, the salty mangrove, the piñuela, the botoncillo and the mariquita. The truly diverse populations of plants and animals are minute to microscopic sea creatures that make up the enormous coral reef structures that are found in Marino Ballena National Park.

What you should consider bringing to the park would consist of a swim suit, scuba gear, a wetsuit, sunscreen, a snorkel, flippers, a scuba mask, binoculars and a camera. Marino Ballena National Park in Costa Rica is close to the beach cities of Playa Uvita, Playa Hermosa and Playa Pedregosa. Marino Ballena, like most places in Costa Rica, will be difficulty to reach in the rainy season from December to April, so a four wheel drive vehicle is recommended. You can fly into Playa Uvita with Sansa or Nature Air domestic airlines.