The Great Green Macaw is currently listed as an endangered species, and much of its habitat is under threat of deforestation in places throughout Central and South America. 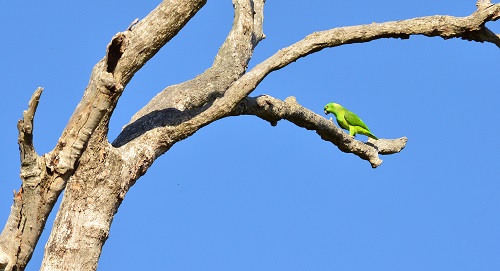 The Great Green Macaw mostly lives in families of five to six birds, but the pairs within these small groups are monogamous. Breeding season occurs from December to April, which is the dry season in Costa Rica, and the pairs will separate from their colonies at this time.

These birds have an interesting courtship routine that usually consists of the birds finding a cavity in a tree. The male will then coax the female into the cavity by using a number of moves including biting the female on the beak or the back of the head, sliding into the cavity and turning its head in inviting gestures.

The Great Green Macaw will produce a clutch of around 2 to 3 eggs in the cavity of a tree. They will often lay their eggs in the cavities of an Almendro tree which is where they normally source their food. The eggs are then incubated for a period of about one month, and the young are then watched over by both their parents. The hatchlings will fledge and leave the nest around eleven weeks after they are born.

The Great Green Macaw has one major food source throughout much of Central America. This contributes heavily to the shrinking population of the species. Deforestation and logging of Almendro Trees, which are a certain type of almond tree, is what is causing the Great Green Macaw to lose its habitat, and thus the species has become endangered.

The Great Green Macaws will travel in flocks to and from flowering Almendro trees in particular times of the year. These animals can live nearly sixty years, and are intelligent creatures. They display their intelligence in a number of ways including their memory. A flock, colony or family of Great Green Macaws will remember the location of a particular Almendro tree for years, but, unfortunately, those trees may disappear with logging. The result is a displaced family of birds that no longer knows where to go and feed.

The Great Green Macaw is one of the largest Macaws. It is also an arboreal bird in that it spends most of its time in trees foraging and doesn’t fly with regularity.