The Poás Volcano may best be known for the magnificent coffee that is produced in the foothills of the mountain. Poás has one of the world’s most acidic lakes in one of three craters, as well. 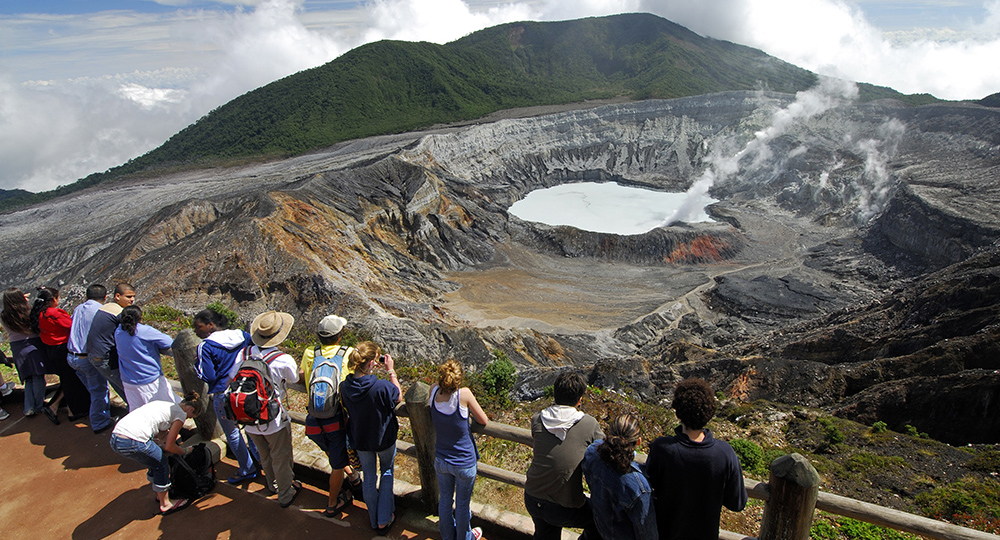 The Poás Volcano is found primarily in the Canton of Poás, but parts of it reach into the Cantons of Alajuela and Valverde Vega in Alajuela Province, Costa Rica. It is about four and a half to five and half hours from Daniel Oduber Quiros International Airport in Liberia. From the Central Valley region and Juan Santamaria International Airport it is around an hour and fifteen minutes’ drive.

Poás Volcano stands at 2,708 meters in elevation from sea level. There are three craters at Poás, and the most famous of those, Laguna Caliente, is host to a very acidic crater lake that is 1.7 kilometers wide and about 300 millimeters deep.

Poás is basalt and dacite stratovolcano. Stratovolcanoes build their mighty precipices over years of activity. Basalt and dacite refer to two different kinds of volcanic rocks that make up the magma and subsequent lava flows that Poás produces.

Poás is currently still erupting, and has been doing so since November of 2009. It has remained a very active volcano since the mid-1800s, and is considered to be at least 10,000 years old if not much more. The earliest carbon dated eruption occurred around 7920 BC.

The DOKA estate is a coffee plantation in the foothills of the Poás Volcano that operates daily coffee tours among other events. There is also La Paz Waterfall & Butterfly Gardens in the vicinity of Poás which plays host to a variety of wildlife and spectacular cascades. Poás is also one of the few volcanoes in Costa Rica where you can travel to the summit and smell the strong sulfur fumes that are emitted from its vents.

*COME SEE Poás and the La Paz Waterfall Gardens on the Coast to Coast Tour!

Strawberries of the Poás Volcano

Meta Description: The Poás Volcano is already known as a perfect growing environment for coffee, but it should also be noted that the soil, temperature and annual rainfall also contribute to great strawberries. 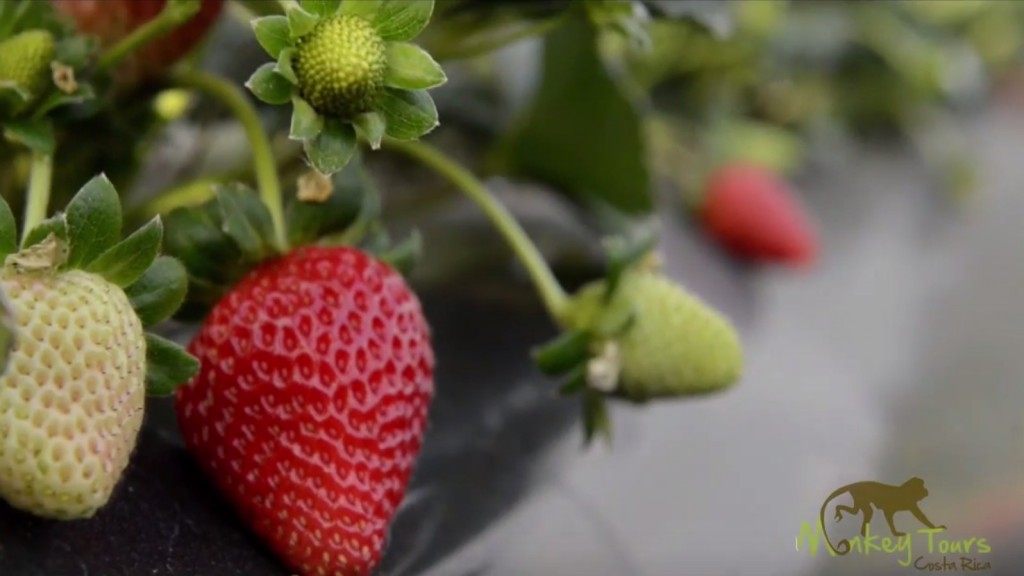 If you are lucky when you visit, they might even let you pick your own

Strawberries can be finicky plants depending on certain conditions. If the soil doesn’t drain well, they will be oversaturated with water. This isn’t the case for Poás due to the slope of the mountain. If the plants are put in areas where potato, eggplant or tomatoes were previously planted, it can cause the strawberries to become diseased. It would seem the farmers on the slopes of the Poás know about proper crop rotations.

There are some other elements at play that help make the strawberries grown near the Poás Volcano so juicy and fresh. Strawberries exceeding a temperature of 16°C (61°F) will suffer from wilting, and the end product will not be a full bodied fruit. Fortunately, the elevation of the Poás Volcano contributes to full bodied fruits that are not over watered, but also not the subjects of dehydration.

The acidity of the soil as a result of the volcanoes periodic eruptions is also a contributing factor to the flavor and heartiness of both strawberries and coffee coming from this region. Magma and even phreatic eruptions result in a deposit of sulfur among other complimentary minerals that help contribute to the overall richness of the soil. It isn’t always an overnight outcome, and the immediate effect of an eruption can be detrimental to the surrounding vegetation, people and livestock. The beneficial renderings do not take place until some years post an incident.

The end result of the mixture of hard work on the part of farmers in the Poás, and the enriching of the soil by minerals deposited from eruptions over time, is apparent in the flavor of these delicious fruits. The next time that you find yourself in Poás be sure to stop by the farm and ask about their strawberries. You won’t be disappointed.

The travel agent program is one way to get some delicious strawberries from the Poas to your clients at the best rates, and one of the ways that you can plan a custom itinerary for your customers, as well.

Poás Volcano is the centerpiece of the incredible Poás Volcano National Park in Costa Rica, and Botos Lake is an exceptionally striking aside, as well.

The flora and fauna of Poás Volcano National Park, especially around the Botos Crater Lake, is stunning. Some of the wildlife found in Poás consists of shrew mice, weasels, rabbits, squirrels, coyotes, different types of bats, some felines, frogs, toads, salamanders, snakes and different kinds of insects. There are also a large number of birds in the park with 79 identified species such as warblers, hummingbirds, quetzals, black guans, green toucans, large-footed finches, yellow-thighed finches and the Prevost’s ground sparrow.

The park has a thriving botanical ecosystem with montane forests and four habitats. The cloud forest near Botos Lagoon has plant species such as the papayillo, the mountain blossom, the oak tree and two different kinds of cypress trees. Between Botos and the main crater of Poás National Park in Costa Rica there fewer species other than those that have adapted to survive the more acidic soil, which was the result of past eruptions, such as the tucuico, the copey and the lengua de vaca fern (cow’s tongue fern). The volcano is also showing signs that it may be building up to a new eruption which would upset the balance of life in the park, yet again.

There are a few cities and towns along the route to Poás Volcano National Park where you can find resorts and hotels such as Vara Blanca, Cerrillal, Cinco Esquinas and San Pedro de Poás. The park can be reached by rental car, taxi, private shuttle or tour bus, but it is advised to travel by way of four wheel drive vehicle. The rainy season from May to November will be the most difficult time to reach Poás. A packing list for the trip might consist of thicker clothes, hiking boots and gear, a backpack, a water bottle, sunscreen, a camera and binoculars.

A Visit to the La Paz Waterfall Gardens

Michelle Jones takes us for a trip into the Poas Volcano National Park area to see the Waterfall Gardens of La Paz in the Northern Province of Alajuela, Costa Rica.

A Sanctuary for Many

The Waterfall Gardens at La Paz are a sanctuary for many different species of animals, and the five waterfalls of La Paz are beautiful places where you can enjoy the natural ambience. The Poas Volcano National Park where La Paz Waterfall Gardens are found is also the home of some of the best coffee in the world, and delicious strawberries can be found along the slopes of the volcano. There are also other activities to be found at La Paz.

A transcript of their conversation is as follows:

Michelle Today we are at La Paz Waterfall Gardens, and we are with our tour guide Gilberto. How are you?

Gilberto Excellent, and you?

M I’m great! Thank you! Gilberto, tell us a little about the tours at La Paz. What’s your favorite part?

G Ok, for me the most beautiful area is the birds. In this little case, you can see almost forty different species of birds that we have in Costa Rica including the macaws, the toucans (actually you can hold the toucans if you want), parakeets and parrots.

M How long does a tour last approximately?

G Two to two and a half hours depending on the time that you spend in each area.

M Besides the aviary, what other animals can you see on this tour?

G Also you can see butterflies, monkeys, hummingbirds, snakes and frogs and one important part is the jungle cats. We have in Costa Rica six different species of cats. Here we have five including the jaguars. Jaguars, you know, are threatened by extinction, because many people have killed them. They are still in Costa Rica in the South and the North.

La Paz is open for tours that usually begin between 10 and 11 in the morning. The regular admission price is $22 for adults and $13 for children. There is also a place to stay at La Paz called the Peace Lodge, and you can refer to the website to see about bookings.