The Arenal Volcano is an iconic figure standing over the landscape of the San Carlos Canton, Alajuela, Costa Rica, and as a mirrored image in the waters of Lake Arenal. 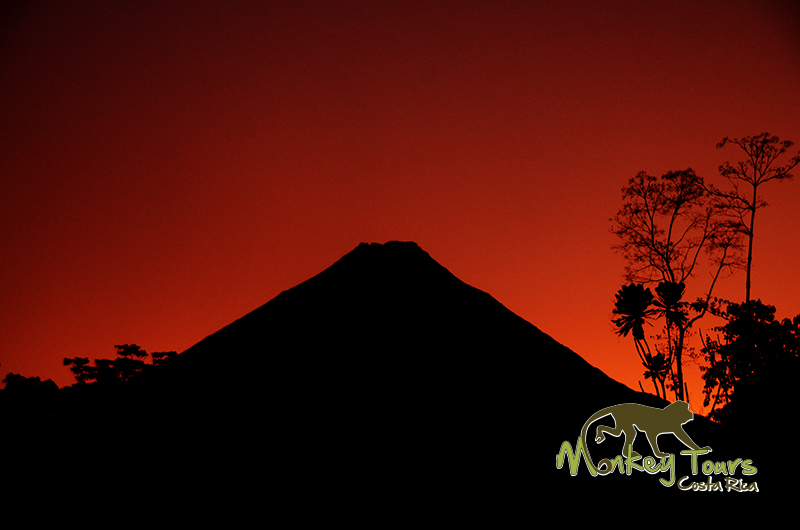 A silhouette of the volcano at sunset

Arenal Volcano is in Arenal Volcano National Park in the Canton of San Carlos, La Fortuna District in Alajuela Province, Costa Rica. It is about two hours and forty minutes from the Daniel Oduber Quiros International Airport in Liberia, Costa Rica, and it’s around three hours from the Juan Santamaria International Airport. It can be reached in a variety of ways including rental car, tour bus or with the domestic airline of Nature Air.

Arenal Volcano stands 1,670 meters above sea level. The crater is 140 meters wide. Arenal is a young volcano by geologic standards, and it is still building.

Arenal is an andesitic stratovolcano, also known as a composite volcano, and it is shaped like a cone. This puts Arenal in the same category as the most devastating volcanoes on the planet including Krakatoa and Vesuvius. Its impressive height will continue to build over time, because it is only around 7,500 years old.

After laying dormant for many years, Arenal suddenly erupted in 1968 destroying three small towns and killing 87 people. Since that time, Arenal remained active until October of 2010. For the moment it is considered inactive. Arenal is believed to have begun building in the wake of the Chato volcano which lies dormant, or possibly just inactive, to the Southeast of Arenal.

Arenal is close to many different area attractions including Lake Arenal, Baldi Hot Springs and Resort, ATV tours, canyoneering and canopy tours to name a few. Lake Arenal is great place to look for a variety of water based activities including freshwater fising where you can expect to catch Machaca, Jaguar Guapote, Rainbow Bass and others; boat tours and wind/water sports are also among the varied activities that you can take part in on the lake.

There are lots of wind related water adventures to be had at the power producing Lake Arenal expanse in Costa Rica like kite surfing and windsurfing.

Lake Arenal serves as a major power production center in Costa Rica supplying twelve percent of the country’s hydroelectric energy from the Arenal Dam that was constructed in 1979. Energy is also collected through geothermal power plants and wind farms along the shores of the lake, and near the town of Miravalles. When Lake Arenal isn’t helping to drive down the cost of electricity, it is a haven for those that like to let the wind direct their path. There are a number of kite surfing schools and windsurfing schools in the area, and the industry is still growing.

Lake Arenal is also a great place to have a picnic while gazing into the mirror like reflection of the Arenal Volcano with its conical shaped caldera. Not only is the scenery quite pleasant, but the surrounding animal and plant life will intrigue Lake Arenal’s visitors. Some of the wildlife that can be found wandering about the lake include the jaguar and tapir. There are more than 300 species of birds in the area, also. Some types of avifauna around Lake Arenal consist of the woodpecker, kingfisher and toucan.

Along the shore of Lake Arenal and in the water itself there are more than 2,000 species of plants. Amid the many different species of flora near the lake you’ll find balsa, different types of palm trees, laurels, figs, heliconias, ferns and bromeliads. The lake is about thirty kilometers across and five kilometers at its widest point. The total area of Lake Arenal is eighty five square kilometers (thirty three square miles). Other plants and animals to look for are as follows:

You should consider the following items when planning your trip to Lake Arenal; a camera, a surfboard with foot straps, binoculars, comfortable shoes, a swim suit and sunscreen. There are a number of small towns and developments near Lake Arenal, so you should be able to find anything that you lack nearby. Some of the towns in the area include Nuevo Arenal, Tronadora and Tierras Morenas, and Lake Arenal can be reached via routes 142 and 143. These items and tips should help you when planning your activities in Arenal.

Arenal Volcano National Park in La Fortuna, San Carlos, is one of the most well-known travel destinations in Costa Rica for many good reasons.

Passing to La Fortuna from the Lake

Coming into La Fortuna from the north, you’ll pass the magnificent Lake Arenal where you can view the conical shaped Arenal Volcano. This magnificent form, which is mirrored in the pristine waters of the lake by the same name, has been the most active volcano in Costa Rica up until recently when Turrialba took that spot. The Arenal Volcano National Park is home to many adventure and ecological activities, animals, plants and resort hotels among other interesting features.

Along with Arenal Volcano, Arenal Volcano National Park in Costa Rica is also the residence of the lesser known Chato Volcano. Chato has been inactive for more than three millennia, and its crater contains a lagoon. Of the fauna that can be found in Arenal National Park there is a high concentration of the 850 species of birds found in Costa Rica, so those interested in ornithology will find a lot to look for or photograph. A few of the animals found in the park include the endangered avifauna known as the quetzal, the white-faced capuchin, jaguars, deer, coati and a large number of snakes.

A Plethora of Flora

The Arenal Volcano National Park in Costa Rica is also resplendant with vegetation, and there are a myriad of trees, shrubs, flowers and many more within the 2,040 square kilometers of Arenal Tilaran Conservation Area. Some of the flora that can be found in the Arenal area includes orchids, heliconias, ferns, laurel, cirri, guayabo de monte, palms, bromeliads, and strangler figs. Any botanists, florists or gardeners visiting the area will be very pleased with what they encoutner in and around Arenal.

How to Get to Arenal

Arenal can be reached from the north or the south, and many of the major resorts in the area can accommodate various travel plans. The domestic airlines of Sansa Air and Nature Air both fly into La Fortuna. If renting from one of the many car rental agencies including Alamo and National, you may want to reserve a four wheel drive vehicle. It isn’t as necessary to have an All Terrain Vehicle in the Arenal area, but it never hurts to be well-prepared. The rainy season, which lasts from around May to December, can make travel difficult in most places in Costa Rica. Arenal National Park is closest to the towns of Tilaran, Pocosol, Quesada, Juntas and Canas.

A short list of things you might want to bring would be a camera, sunscreen, binoculars, hiking gear, hiking boots and plenty of time to get lost on varying adventures in the beautiful scenery of Arenal.

What Is the current lava flow at the Arenal Volcano?

There is currently no lava flow from the Arenal volcano. It is resting indefinitely since 2010 after being wildly active for 42 years. The Arenal area (La Fortuna) is still teeming with wonderful activities though, including hiking, zip lining, horseback riding, birdwatching and cultural activities. Active volcano or not, the views are still just as stunning and we recommend visiting the area when you come to Costa Rica.

Is it possible to climb to the summit of the Arenal Volcano?

No. Because it is an active volcano, there are many safety measures that must be followed, as well as legal restrictions to ensure your safety. However there are many trails to explore the outskirts, and several vantage points to enjoy the view of the summit from a safe distance.

If travel agents have any specific questions for clients, you can be sure to find an answer with Costa Rica Monkey tours.

How close can you get to the Arenal Volcano?

Since the Arenal is an active volcano, there is a high-risk danger zone that marks a perimeter after which no one is allowed to pass on its skirts. There are trails that lead into the park, up to a volcanic lake and other natural attractions, but the crater is not accessible. Please be cautious and ask your guide or hotel receptionist for the volcano’s status on the day you plan to explore it.

Plan a personalized vacation in the La Fortuna area with our custom vacation packages.