The White-nosed Coati found in Costa Rica is also known by the common name coatimundi, and in recent years it has become the same kind of pest as raccoons in the United States. 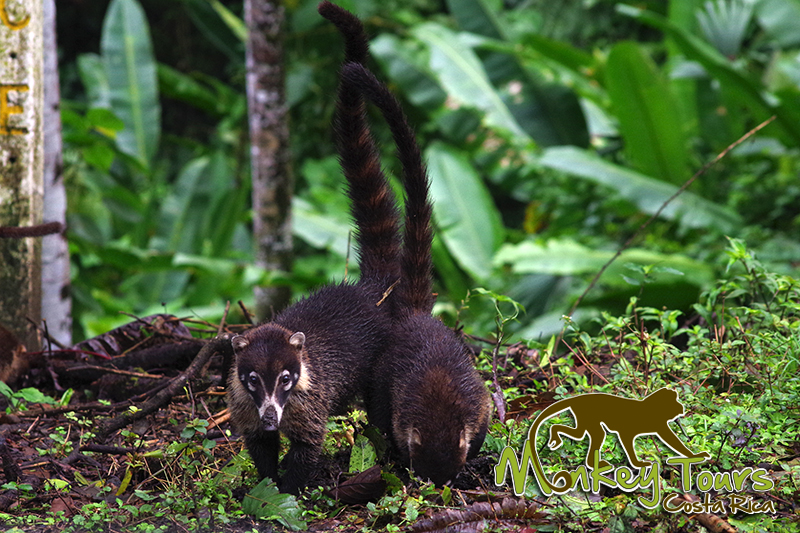 A pair of coatis foraging in the forest

Coatis begin mating at the start of the rainy season to maximize food potential. In the breeding season, a male will join a group of females, and mate with them in trees or on the ground. After a successful copulation, females will separate from the group to build a nest in the trees. The gestation period is about 11 weeks, and the mother and baby coati stay in their nest for around five weeks after birth. At around 6 weeks the mother and her babe rejoin her original group.

Coatis are diurnal foragers who spend most of their lives in trees making them primarily arboreal. They are omnivorous and eat fruit, eggs, carrion, insects and small vertebrates. Females are quite sociable, but they tend to dominate males. As a result, males tend to become solitary, and will only join female groups during the mating season.

Coatis communicate with one another via a collection of sounds that can convey joy, anger or dejection.

Coatis will smother themselves in the resin of certain trees as an insect repellant. They demonstrate a high level of intelligence, and are easily domesticated. They have been brought to a number of urban locations as a tourist attraction in Costa Rica through food rewards, but this has caused problems with local populations of Coatis becoming too large and aggressive.