The Blue Morpho Butterfly maybe one of the most well-known insects of Costa Rica from its appearance on television and the film, “The Blue Butterfly,” starring William Hurt. 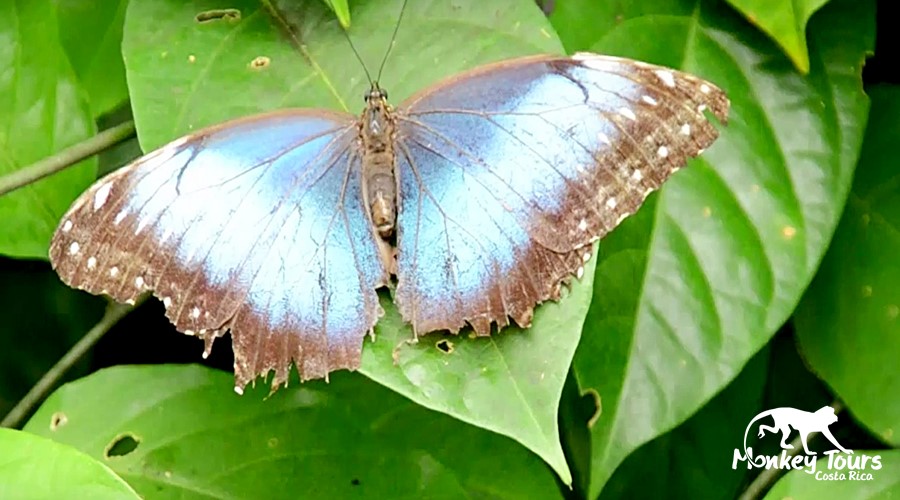 Blue Morphos can be found from the Southern tip of Florida and the Baja Peninsula throughout Central and South America. They are especially prolific in Costa Rica, Brazil and Venezuela. Blue Morphos prefer to be near a water source, and although they inhabit different kinds of forests, they are most often found near rivers, the ocean, streams, lakes and other small bodies of water. They also like to inhabit the forest canopy, but it is harder to spot them there.

The varying species of Blue Morphos exhibit sexual dimorphism in some cases. Sexual dimorphism is when the male and female differ in physical attributes a great deal. In the M. amathonte and M. peleides species this holds true, but not in the case of other Morphos where the female and male are not as easily distinguishable. In the case that the male and female don’t look alike, then the male will retain the characteristic blue wings and the females’ are brown with twinges of blue interspersed among the wings.

From egg to caterpillar; metamorphosis to butterfly and finally death is about 115 days. At the Larvae stage, Blue Morphos are cannibalistic. Hairs of the caterpillar can irritate human skin, and they also secrete an odor for their glands as a defense mechanism against predators. Morphos also group together in their youth as a mob to hopefully abate predation.

Female Blue Morphos plant their fertilized eggs on legume trees which are their main source of food.

Many of the plants that a Blue Morpho caterpillar consumes when it is young make it toxic to predators, but they also have a good defense mechanism in their flight pattern. The colors of their wings flash as they bob up and down in flight thus distracting their prey.

Blue Morphos in adulthood will feed off of fruit juices, dead animals, nutrient rich mud, tree sap and legume sap. Their food is always in liquid form. Blue Morphos are not cannibalistic after they pass through the five instars (or stages) of their development.

Blue Morphos get their second name from the Greek Goddess Aphrodite (Roman=Venus) whose appellation is Morpho. There are more than 170 different species related to the common name Blue Morpho. The two subspecies found with regularity in Costa Rica are the Morpho Menelaus Amathonte and the Morpho Peleides.

Blue Morphos are very important butterflies for collectors, and the going rate for a species can be quite expensive. Their wings are also used to make jewelry.