The White-faced or Capuchin Monkey is also known for the common names of the White-headed Capuchin, the White-throated Capuchin and Carita Blanca in Spanish. 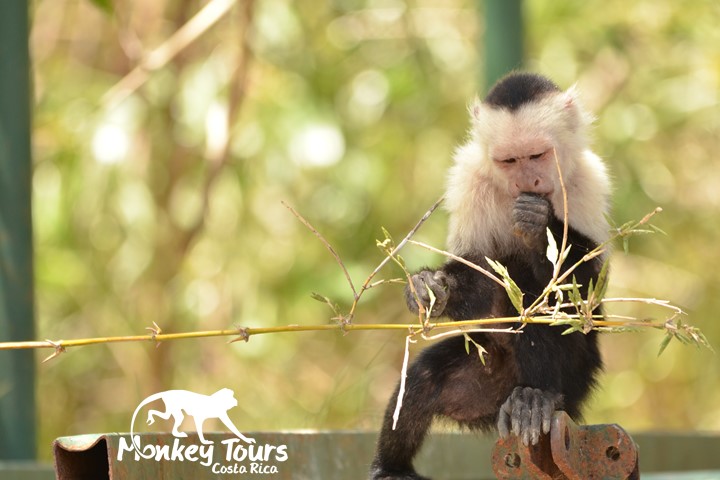 He needs a friend.

Mating season generally occurs from June to October in the rainy season. A male Capuchin will commonly mate with multiple females in a social group. Males copulate in a matter of minutes, but gestation lasts as long as 6 months. The female will then give birth to one individual and in some cases twins.

The young ride on their mother’s backs for about 6 weeks, and reach a state of independence by 3 months. The young do not wean, however, until 6 to 12 months. Many of the monkeys in the group take turns taking care of the young, and males engage in child rearing.

White-faced Monkeys are omnivorous. They consume mostly fruit, but they also eat insects, small vertebrates, leaves, flowers and nectar. They are arboreal and diurnal, and forage for their food in the forest canopy. They adapt to a variety of environments quickly, and it is believed by conservationists that they are more likely to survive habitat deforestation with greater success than some other species.

Females spend much of their lives in the same social group, but males will change their social group a number of times. In terms of hierarchy, males are dominant followed by females and children.

Capuchins are considered second only to Spider Monkeys in terms of intelligence among new world monkeys. They rub a number of plants into their fur to discourage insects such as ticks and mosquitos from feeding on their blood. They also use tools in defense and as a means to forage for food.