The Fer-de-Lance is definitely a snake to keep your distance from when traipsing about the rainforests of Costa Rica. This viper is quite a venomous one. 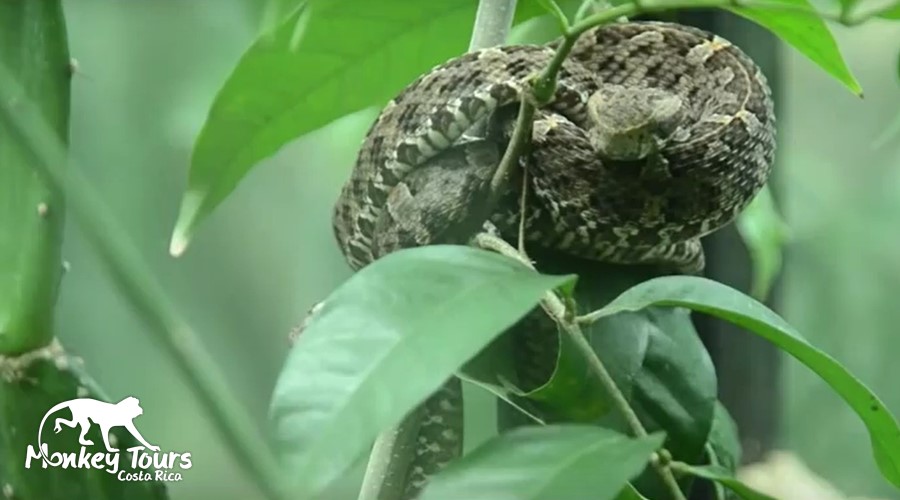 The Fer-de-Lance is found from the Caribbean Coast of Mexico through Central America. It inhabits lowland wet tropical forests and premontane rainforests for the most part, and has a particular fondness for banana plantations. They can be spotted in Palo Verde National Park, Chirripó National Park, Corcovado National Park, Tortuguero National Park and Carara National Park.

Males pursue females, and perform a short courtship dance. When a female accepts the male’s advances, the male will make a short chase of the female. After the male catches the female, she elongates her body to accommodate the male.

The Fer-de-Lance commonly pursues prey such as small reptiles, small amphibians, small mammals and birds. It is a solitary nocturnal creature that is more active when the weather is warmer. Adolescent Fer-de-Lances are somewhat arboreal, but they dwell on the ground once they mature.

The Fer-de-Lance is an excitable snake that will flee many a situation when it is surprised. In some instances, however, it will turn and strike.

Known by the Spanish name of Terciopelo (skin like velvet), this snake has a high level of toxicity. It is, therefore, very dangerous, and any antagonizing of the snake should be avoided at all costs.