The Spiny-headed Tree Frog finds itself on the endangered species least do to habitat destruction primarily, but it is often considered of least concern. 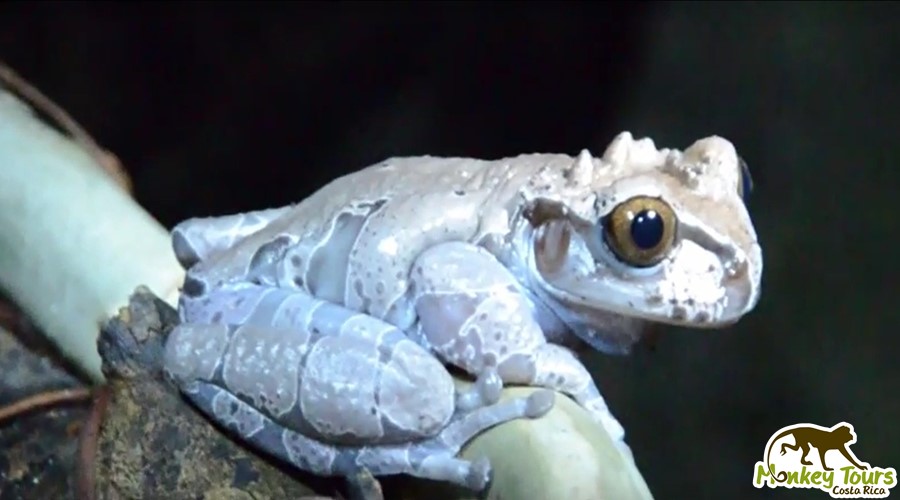 The Spiny-headed Tree Frog doesn’t exactly cover a range in Central America, but has some more or less dense populations in Mexico, Honduras, Costa Rica and Panama. Although, the population in Mexico has dwindled due to deforestation, and it may have been entirely extirpated from the area.

In Costa Rica, the Spiny-Headed Tree Frog is found most often in areas of montane and premontane cloud forest. Because this frog thrives in Costa Rica, it can also be found in upper lowland forests, subtropical and tropical zones. Some destinations that you might expect to at least hear the frog chirping in the night include the Monteverde Cloud Forest Reserve, La Selva Biological Station, Rincón de la Vieja Volcano National Park and Arenal Volcano National Park.

During the rainy season, males call from bromeliads and tree holes to attract female suitors for breeding. The female will then lay three to five fertilized eggs in a clutch of around 160 eggs. Once the young tadpoles have hatched, they make meals of the unfertilized eggs in order to survive. After about 60 to 130 days, the tadpole metamorphoses into an immature frog.

Spiny-headed Tree Frogs are rarely seen due to their arboreal lifestyle. They are primarily carnivorous, and will make meals of formicine ants and mites outside of the time when they are tadpoles. They spend almost the entirety of their lives in the trees, and may only head down in the dry season when water becomes sparse in tree cavities.

The Spiny-headed Tree Frog is also sometimes referred to as the Crowned Frog, because the nodes that protrude from just below the frog’s eyes resemble a crown. The frog is seldom scene in the wild, but it is heard quite often. If you would like to see the spiny headed tree frog while visiting Costa Rica, you should headed to the amphibian aquarium at the Monteverde Cloud Forest Reserve.