The Great Blue Heron makes its way south to winter in the warmer areas of Central and South America, and can be found primarily in wetland marshes. 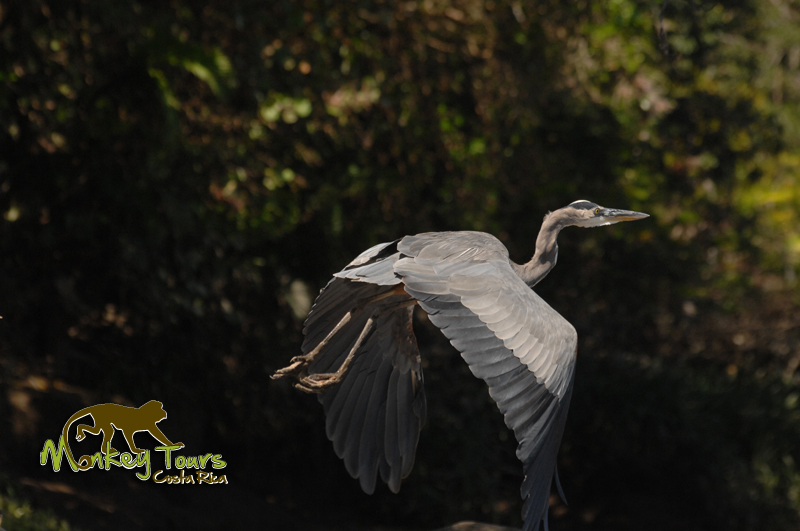 There are five known subspecies of the Great Blue Heron, and they can be found at various places throughout Canada and the United States during the summer months. Many of the subspecies east of the Northern Rockies make their way to warmer hunting grounds when the cold weather rolls in to their northern retreats. The birds that live in Florida and Southern California are year round residents.

In Costa Rica, Blue Herons can be found in the marshes and mangroves of places such as the Tortuguero Canals, the Terraba Sierpe Wetlands or the well-known retreat of many different migratory birds in Palo Verde National Park. The birds are also found around lakes or flooded meadows such as the Caño Negro Wildlife Refuge in the north of Alajuela Province, Heredia Province and Limon Province.

During the mating season, Great Blue Herons become the most sociable, and their harsh croak is heard commonly as they search for a mate. They generally mate in colonies with only other Great Blue Herons as members, but occasionally they group with other species of herons. They make nuptial nests in trees near the lakes, marshes and flooded plains where they hunt, but they return to the colony once mating has been completed.

Great Blue Herons feed on several other species, and are strong fast diving hunters. Their diet is primarily fish, but they will also eat crabs, shrimp and other smaller aquatic animals when living closer to the sea. The birds that live inland also feed primarily on fish, but they will make meals of small rodents, amphibians, reptiles, other birds and insects. There is some overlap between birds that live inland and those that live closer to the sea.

Great Blue Herons are preyed upon primarily by other birds and especially raptors. Some of the known birds that prey on Blue Herons include turkey vultures, bald eagles and hawks. Their nests are also often pilfered by animals such as raccoons, coatis and tayras. Land based animals that make meals of Blue Herons include alligators, caiman, bears and large predatory cats.

The blue heron appears famously in the art work of John James Audubon.

Migration Pattern: north to south for some species in winter