The White Tailed Deer is also sometimes referred to by the common name of Virginia Deer, and is has been a national symbol of Costa Rica since 1995. 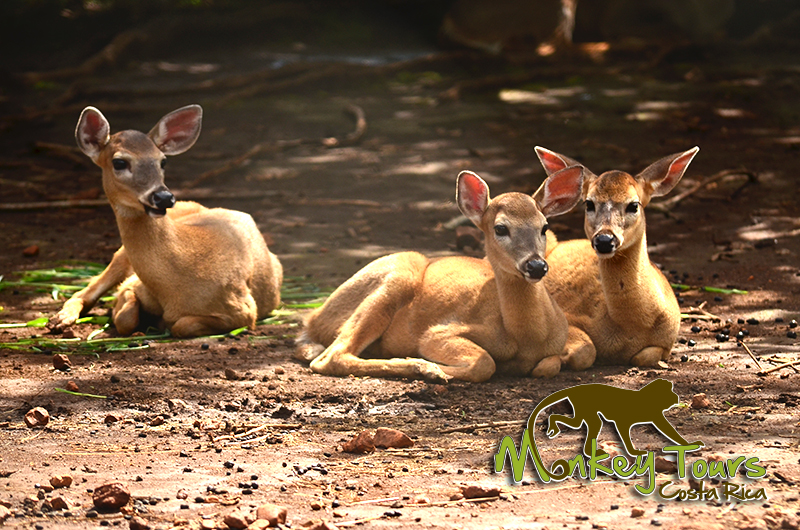 In Costa Rica, the two subspecies found include O. v. nemoralis and O. v. chiriquensis. They are found in the Guanacaste Province in the greatest numbers, but smaller groups can be found in much of the country. You can look to see white tailed deer in pine forests, swamps, arid lands and temperate rain forests in national parks and refuges such as Guanacaste National Park, Barra Honda National Park, Braulio Carrillo National Park, Santa Rosa National Park and Caño Negro Wildlife Refuge to name a few.

Males compete for the affection of females by having battles where they engage their antlers in sometimes lethal combat. Females begin showing signs of estrus, which is more commonly known as the rut, when the fall begins to approach in North America. In Central America, the rainy season is the likely cycle which causes female reproductive levels to spike. A female deer, or doe, matures sexually after one to two years, and the younger females stay away from heavily populated male areas before maturation. Does give birth to one to three fawns after a 7 to 8 month gestation period. The fawns are spotted with white dots that generally fade as they age.

When the rut takes place, males will rest and eat very little. This is often the reason why fighting bucks sustain injuries in battle. There is also a higher number of competitors in regards to population density, and vice versa when there are less males and more females. Males compete in correlation with the temperature, and the competition rises once the temperature goes above 4°C. Costa Rica rarely drops below this temperature (except in the very high mountain ranges like at Chirripo), so it can be assumed that males compete year round.

Deer are preyed upon by the larger predators that populate the rain forests and arid lands of Costa Rica. They may fall victim to Jaguars, Pumas, Crocodiles or Caimans along with venomous snakes such as the Fer-de-lance. Their main source of food includes legumes, shoots, cacti, grasses, leaves, berries, corn and fruit.

White tailed deer appear on the 1000 Colon bill as a national symbol. It was declared a national symbol during the administration of Jose Maria Figueres, who was a former president of Costa Rica, on May 2, 1995 as a part of Costa Rica Law No. 7497. It is accordingly a living representation of Costa Rica’s heritage and natural fauna. Hunting of white tailed deer has been outlawed, because the species is endangered. Poachers have disregarded the law in recent years, but mostly the animals remain protected in the system of national parks and wildlife refuges.