Named For a Folktale

Rincón de la Vieja is named for a folktale of a woman and her family that lived in the area of the volcano many years ago, and the volcano remains active will multiple craters. 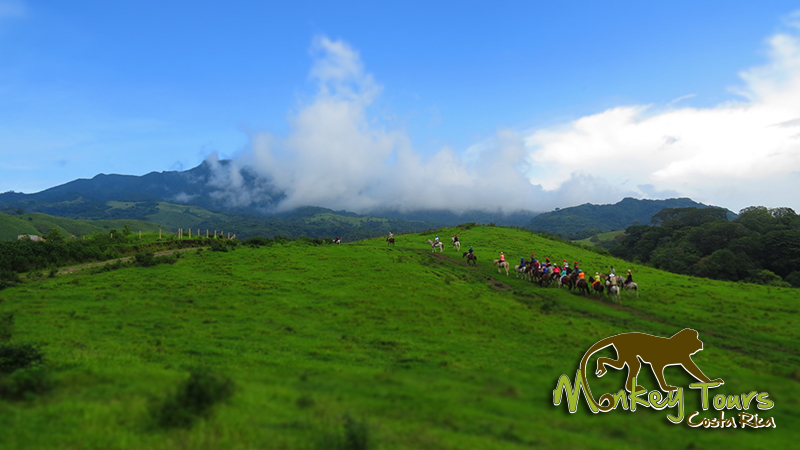 Rincón de la Vieja lies to the Northeast about an hour’s drive from the international airport in Liberia in the Canton of Liberia, Guanacaste Province, Costa Rica. From Juan Santamaria International Airport in the Central Valley, it is about three hours and forty minutes away. You can reach Rincón de la Vieja Volcano and the national park by rental car, taxi, tour bus or private bus.

The highest peak of Rincón de la Vieja Volcano stands at 1,916 meters from sea level, but there are several other volcanic vents that are found in the area. The most active vent is called Von Seebach, and it stands 1,895 meters above sea level.

Rincón de la Vieja is an andesitic complex volcano. Andesite means that the volcano is formed of igneous or volcanic rock. It is considered a complex volcano, because of the multiple vents that produce eruptions or ventilation for the magma underneath.

Rincón de la Vieja has not had a large eruption since 1820. It continues to produce a number of eruptions at the nine known sites of the volcano. The activity of Rincón de la Vieja is probably not as explosive as other volcanos, because there are multiple vents where pressure is released. The area has been under observation for its potential use as a geothermal energy source.

There is a lot to do in the Rincón de la Vieja area and the accompanying national park which covers 34,800 acres. Some of the area activities include horseback riding, forest canopy zip-lining, hot springs, hiking and rappelling. Some area resorts include Borinquen Mountain Resort and Hacienda Guachipelin.

Rincón de la Vieja National Park in Costa Rica is an oft visited park in the province of Guanacaste, Costa Rica, for its cloud forests and volcanoes among many other reasons.

By far one of the most popular tourist destinations in Costa Rica, Rincón de la Vieja National Park doesn’t disappoint its visitors in terms of splendor and breath-taking scenery. Another allure of Rincón de la Vieja is its proximity to Liberia, Costa Rica, and the Daniel Oduber Quiros International Airport which makes it easier for incoming visitors to hop right off the plane and head out for an adventure in the treetops. Rincón de la Vieja spans over 34,000 acres (12,759 ha), and has an array of ecosystems from montane forests to dwarf cloud forests. Travel agents should be sure to let their clients know about the great deals we have in the Rincon de la Vieja area.

Rincón de la Vieja National Park in the province of Guanacaste, Costa Rica, is the magnificent home of a grand assortment of flora and fauna amidst its waterfalls, hot springs (open to bathers) and nine active craters. Some of the wildlife that can be found in the park consists of mountain goats, peccaries, ocelots, pumas, jaguars, tapirs, white-tailed deer, agouti, armadillos, two-toed sloths, coati, coyotes, anteaters, Central American agouti, howler monkeys, red-colored monkeys and white-faced monkeys. The park is also home to 300 bird species such as the horned guan, the blue-crowned motmot, the mountain goldfinch and the collared aracari.

The plant life of Rincón de la Vieja National Park differs depending upon the type of forest that it is found in. The geothermal activity of the park also plays a role in the makeup of the park’s bionetworks. All of that natural influence makes for a varied and beautiful topography in Rincón de la Vieja. A number of the trees that can be found in the park consist of the laurel tree, the Guanacaste tree, the Spanish cedar, the gumbo-limbo and the copey. Rincón de la Vieja is also where the national flower of Costa Rica can be found; the Guaria Morada (purple orchid).

Location & How to get to Rincon de la Vieja

Rincón de la Vieja is easily reached from the city of Liberia, or the Juan Santamaria International Airport in Alajuela, Costa Rica. You may want to seek out a four wheel drive vehicle for the trip, and it would be better to head to the park in the dry season from December to May. When you do make your way to Rincón de la Vieja, you should bring hiking boots, thicker clothes (for the higher elevations), a camera, a water bottle, a backpack, a swim suit (for the hot springs) and some snacks. Monkey Tours also makes your trip easy when you book a fully escorted tour.

Hacienda Guachipelin Hotel in the province of Guanacaste, Costa Rica caters to adventure seekers and outdoors enthusiasts alike. Finding an adrenaline high at this Rincon de la Vieja hotel is a regular occurrence.

A Much Frequented Tourist Destination

The area of Rincon de la Vieja (The Corner of the Old Woman) is a much frequented tourist destination for many reasons. The Guachipelin Ranch Hotel is a good place from which to enjoy this area, because of its relaxing atmosphere and superb lodgings. With 54 rooms both standard and suites, the Hacienda Guachipelin Hotel has ample space for guests.

Rooms come with air-conditioning, fans, cable TVs, solar hot water heaters, private baths and toiletries. At the hotel you will find a reception area, swimming pool and bar, cattle and horse corals, and a restaurant which combines Costa Rican fare with international cuisine. The restaurant provides meals that are both a la carte and buffet, and is open for breakfast from 6:30 to 9:30 am, lunch from 11:30 am to 3:30 pm and for dinner from 6:30 to 9:30 pm.

Activities Near the Hotel

Hikers can enjoy the famous Las Pailas Trail in the Rincón de la Vieja National Park among other trails in the area. Thermal springs and volcanic mud pools can be found along the many forest paths. The Hacienda Guachipelin Hotel runs its own canopy tour where you can take to the tree tops on a zip-line. Mountain climbing, rappelling, horseback tours, and waterfall tours are among some of the other tours offered by the hotel. You plan other activities in the area, as well.

After you’ve tired yourself on a mountain hike or in a zip-line tour, you can head to the Symbiosis Spa. At the Symbiosis Spa in this Rincon de la Vieja Hotel you will find full body massages, deep tissue massages, foot reflexology, couple’s massages, mud wraps and chocolate wraps. The Symbiosis Spa at Hacienda Guachipelin Hotel is open from 7 am to 2 pm, and is reachable via horseback or vehicle transport.

The Guachipelin Ranch Hotel is located approximately 3 hours and 45 minutes from the San Jose international airport in Alajuela, Costa Rica. From there it’s another hour and a half to the capital city of San Jose. Daniel Oduber Quiros International Airport in Liberia, Costa Rica is a much shorter trip at just 40 minutes away from the hotel in Rincon de la Vieja.

Borinquen Hotel is one of those places off the beaten path that you won’t want to miss. This Hotel in Rincon De La Vieja, Costa Rica, (“The Old Woman’s Corner” in English) is in a Volcanic National Park where you may find some folklore among its other attractions when visiting this majestic property.

A Day in the Life

You can start your day at Borinquen with a complimentary breakfast, before you take off on a hiking trip around one of the many mountain paths in Rincon De La Vieja in Costa Rica. Once you’ve tired yourself from trekking the mountain paths you might head back to the hotel spa, Anahuac Spa, and have a massage while watching the forest and river below.

If you want to sit pool side at the outdoor laguna style pool with swim-up bar, you’re more than welcome. There is free WiFi in all public areas if you need to check your e-mail or put in a few hours on your Kindle. When you’re feeling a bit peckish, you can look to one of the two restaurants offering national and international dishes.

A hiking trip will allow you a chance to hop in a thermal hot spring, check out some of the area waterfalls or see a variety of species including sloths, spider and howler monkeys, birds and more. The local wildlife won’t be all that you will see with a backdrop of dwarf cloud forests and many different kinds of local fauna.

An area shuttle can take you to places like Church of La Ermita La Agonia, a Spanish style colonial church dating to 1825, or to one of the many forest canopy tours, horseback riding tours, river-rafting tours, all-terrain-vehicle riding tours and wall-climbing tours within the vicinity of Borinquen Hotel.

Heading to the Beach

A beach shuttle might place you at one of the beaches in Guanacaste for the day. You could choose to head to Tamarindo for surf lessons, Playa Negra for the black sand and surfing or Playa Conchal to read and relax. There are more than 300 beaches in the Guanacaste area on the Pacific side of Costa Rica.

At Borinquen Hotel in Rincon De La Vieja, Costa Rica, you will find thermal spring water pools to soak in. You can take a volcanic mud bath and purify your skin and pores. Afterwards, you can let your pores open up in the steam-room designed naturally from volcanic steam vents.

Borinquen Hotel is 12.8 kilometers from the Daniel Oduber International Airport in Liberia, or about 16 minutes via shuttle bus. There are 39 air-coniditioned rooms with mini bars, safes, satellite TVs, toiletries and more at this hotel in Rincon de la Vieja, Costa Rica.

Is There an Entrance Fee to Rincon de la Vieja?

Yes. The fee to enter the park is $10 for adults and $1 for children, but those fees are covered by your all-inclusive tour with Costa Rica Monkey Tours.

Rincon de la Vieja National Park is open every day from 6:00 am to 3:00 pm except for some holidays like Christmas and New Year’s Eve and Day.

How does a mud bath at Rincon de la Vieja help your skin?

The volcanic mud of the hot springs and surrounding areas of Rincon de la Vieja is filled with nutrients that help to nourish your skin and revitalize it.