The Guatil Pottery Village of Guanacaste

A Cultural Tour Instead

Many of the tours of Costa Rica focus on adventures, the natural beauty of the country and its wildlife, but the Guatil Pottery Village focuses on the arts of the people. 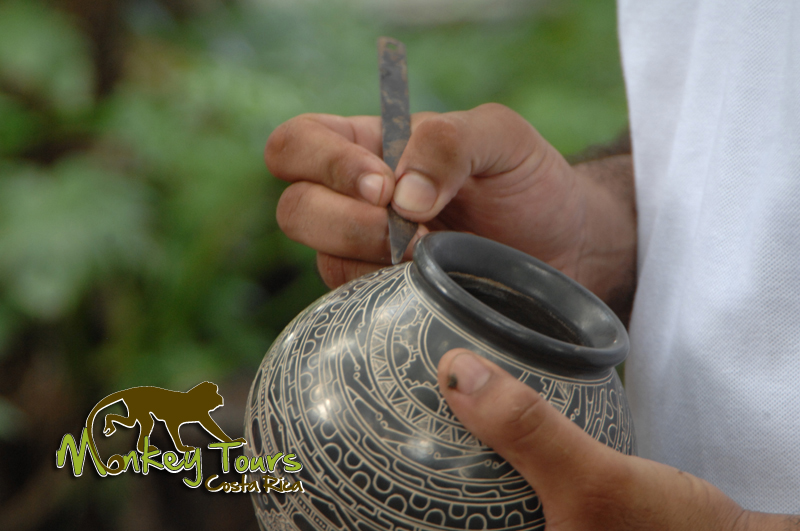 Learn about the pottery creations with Costa Rica Monkey Tours

The village of Guatil is near the larger town of Santa Cruz on the Nicoya Peninsula, and its inhabitants employ the traditional methods for making pottery that have been in use for hundreds of years in the area. The pots, plates, vases and other potted wares are sold for relatively inexpensive prices, and they are produced by the Chorotega indigenous tribe.

The name of the tribe was first identified by conquering Spaniards in the 16th century, but the tribe itself has inhabited the Guanacaste area for much longer. At the time the Spaniards had first arrived in the area, the tribe was believed to be cannibalistic as were other indigenous groups that populated the area. The incoming Spanish had several intense battles with this group as they made their way through the region.

The method by which the pottery is made is complex in its own right. The clay that is used is dried and mashed to make a powder. Once the dried and mashed powder reaches a cetain consistency, it is combined with iguana sand (sand which has been proliferated with iguana eggs). Water is later added to the mixture, and the clay is then formed into the desired shape. The penultimate addition made to the pottery is painted designs. After the new shape has completely dried, it is finally fired in a wood fire.

When you finish learning the process for making Chorotega Pottery, you can enjoy some of the local treats. Traditional cuisine is also a large part of the Guatil experience. Along with corn tortillas, tamal and other homemade food items, you will find a local drink known as the wine of Coyol, but be careful when drinking it. The wine of Coyol reacts with the sun after being imbibed, and you may find its effects showing up again and again for multiple days.

Our Monkey Tours host took the time to visit the Guatil Pottery Village in Guanacaste Province, and to learn a little about the process by which the Chorotega style pottery has been made for centuries. Here you can find a transcript of her conversation with one of the purveyors of the old traditions of the indigenous people that have been living in this part of Guanacaste for centuries.

Guatil is on of the activities you’ll find when visiting Costa Rica on the Essential Costa Rica Tour.

Below is a transcript of their conversation:

Michelle Sir Willy, tell us a little about the materials you are using.

Willy The materials are the same used by our ancestors which practically come from the Earth. The colors are taken by way of oxidization, and were given the name “curioles,” by the indigenous tribes for some reason. The white paint is from oxidized zinc. The red is from oxidized iron, and the black is from oxidized manganese. The clay is taken from the tools of the mountain and from mud banks. Later, it is dried and pulverized in wooden urns. After it is pulverized, it is passed through a sieve to strain out larger chunks of earth and rock. Iguana sand is found 3 km from the town, and we must dig one meter below the topsoil. The sand is also strained to take out particulate matter such as fine stones and roots, and later added to the clay. As I mentioned before, this is a millennial art passed from generation to generation, and I learned this from my mother and my great grandmother. Now I teach my children and I pray to God that this tradition won’t be lost in future generations.

Descritption: On some of the many Costa Rican adventure tours with our tour company, you will be visiting the Guaitil pottery village of Guanacaste Province, Costa Rica. 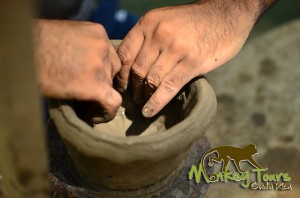 A Town of the Past

Positioned among the small cities of Nicoya and Santa Cruz, Guaitil is renowned for its pottery that retains a pre Columbian grace. This entire town is devoted to the manufacture of clay pottery and keeps the same ancient traditions used from generation to generation by the Chorotegan Indians. This is a population that emigrated from Mexico to Costa Rica 800 A.C. The villagers here have shaped for more than 5000 years some of the finest specimens of craftsmanship in the world. The Chorotegan Indian tribes once lived across Costa Rica’s entire northern Pacific region where Guanacaste and the Nicoya Peninsula are currently located. Nicoya is the name of the Chorotegan chief who administrated the area when Spanish conquistadors arrived in 1523.

A Once in a Lifetime Opportunity

This experience is certainly a once in a lifetime opportunity. Costa Rica Monkey Tours is proud to have added this leg of the tour for our guests to better understand the roots of Costa Rican life, and the impact the conquistadores had among the natives when they settled in their land. You will literally have front row seats to view the step by step process of this wonderful art along with a history class of this intriguing culture. Travel agents can work with our team at Monkey Tours to include this in one of our tours or as part of a custom itinerary.

How the Pottery is Made 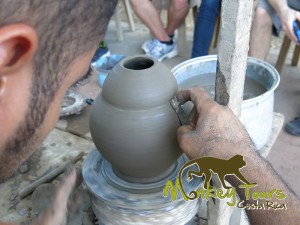 The process for creating the art is not easy and some pieces might even take up to a week of work to achieve the final result. It’s with great pride and love for their culture that they continue making the pottery. The pottery is crafted by first drying the clay, after this they pulverize it in a large wooden mortar with a huge wooden crusher until it reaches a dust form. The clay dust is then mixed with iguana sand; this is a type of very fine freshwater sand called this way because iguanas typically lay their eggs in it. After water is added to the mixture, the clay is molded by hand until it becomes soft and pliable. The artist then shapes the object to be created on a manual hand-operated pottery wheel, using such tools as wooden sticks, leather pieces, rubber pieces or a knife to shape and form the piece.

The specific parts are formed only by using just a small tool and the hands of the expert pottery maker. The shapes vary from large bowls and urns to ornaments, platters, and also very exotic whistles are made. Once formed into the desired shape, the piece is given the finishing touches using either knifes or spoons and is then positioned under the sun to dry. Once dry, the object is given an outstanding polish. 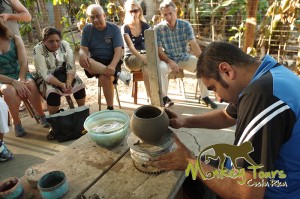 After this tour to Guaitil you will gain knowledge of how pre-Columbian people used to live and work and how they continue to do so despite of the troubles they face with an uncertain future due to a scars economy. If you purchase their pottery, you take home unique memories and souvenirs and encourage an occupation endangered by current times. This is especially the case for the young people who do not desire to abandon their village, but rather stay there and continue with the traditions of their respected descendants.